What a weekend! 🥰 Adrift Lab invited to participate in a cultural exchange with Indigenous rangers from TAS and WA

In mid-August, the Adrift Lab team had the privilege of participating in a cultural exchange program. Seven team members from the Esperance Tjaltjraak Native Title Aboriginal Corporation (ETNTAC) travelled to Hobart to meet with the Tasmania Indigenous Rangers, including Shannon & Josh Mansell, Jesse Williams, and Tananger (Tan) Peet from Parks & Wildlife. 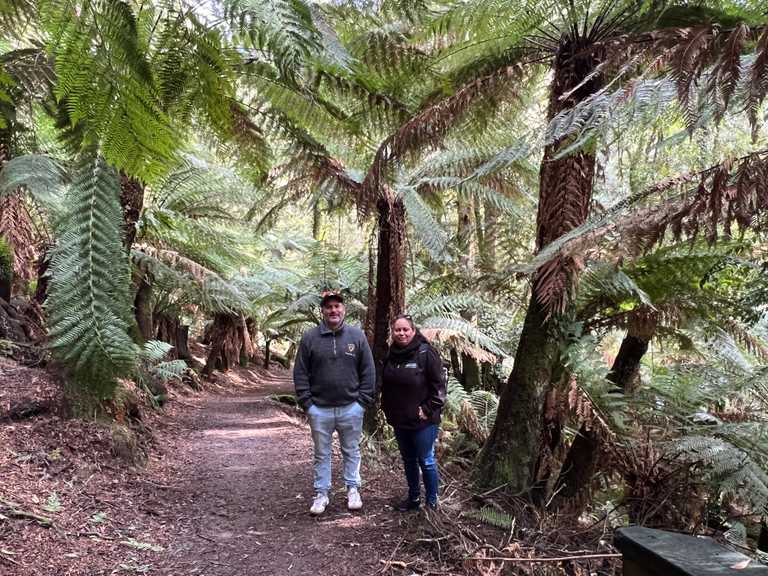 When coming onto others’ country, it is a cultural protocol to be welcomed by Traditional Owners (TO’s), thus Tan held a smoking ceremony at larapuna/Eddystone Point. Aunty Sharon and Aunty Rose also welcomed the Tjaltjraak team at the Aboriginal Community Center in Launceston.

Networks and a strong sense of community are extremely important within Aboriginal communities, and the Rangers are no exception. Tjaltjraak’s visit provided a valuable opportunity for Indigenous Rangers working in Tasmania and Western Australia to share stories and ideas and identify approaches that have been shown to work well to protect Country. Despite the distance between Tasmania and Western Australia, there are many threads that joined these two teams. For example, members of Tjaltjraak Rangers immediately recognised the native cherry (Exocarpos cupressiformis), a small tree native to coastal Tasmania that is commonly eaten as bush tucker. In Western Australia, a closely related and similar looking species (Exocarpos sparteua) is also a much-loved treat in summer.

During the visit, the TAS Aboriginal Rangers took Tjaltjraak Rangers to Standing Camp at krukani lumi, part of the wukalina Aboriginal walking tour. They also visited Pyengana so the WA Rangers could see Tasmania’s wet sclerophyll forest and tallest waterfall (St Columba). This highlighted the incredible diversity of flora and habitats over short distances in Tasmania and showcased many of our native fauna including the endangered Forrester’s Kangaroos.

Later in the week, Adrift Lab students Lillian Stewart, Megan Grant, Hayley Charlton-Howard, and Nina Jones joined Dr Jenn and the WA Rangers in a clean-up of ~20km of remote beaches around Deep Creek. Together, we removed >1000 pieces of marine debris that was counted, weighed and sorted so that the data could be submitted to Tangaroa Blue (AMDI National Database). We also mapped and removed 1000s of invasive sea spurge plants alongside members of the "Friends of Larapuna" bushcare group.

Quote from Tjaltjraak Ranger Jennell Reynolds: “What really resonated with me is the similarities with home, noticing that we have that too! The hospitality we were shown was incredible, we instantly felt at ease with the Tasmanian Aboriginal community. The pride they showed with their cultural heritage that’s still very much alive and well in Tasmania! One of youngest Rangers - the pride that she showed and the grasp of her traditional language, hearing her speak her language while conducting a smoking ceremony was inspiring”.

« PreviousLong-awaited Indigenous tattoo for an Adrift Lab team member
Next »A podcast and funding WIN!